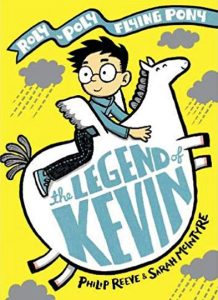 Sarah McIntyre presents: The Legend of Kevin
Who doesn’t love ponies? Especially roly-poly ponies who can fly? Come meet Kevin, the four-legged, two-winged hero of The Legend of Kevin and Kevin’s Great Escape. Join the co-author and illustrator Sarah McIntyre for story fun and drawing, and take home a drawing of your own! Sarah McIntyre is half of the team behind Pugs of the Frozen North, Oliver and the Seawigs and Cakes in Space.

Illustrator and writer Sarah McIntyre is easy to spot in her pointy glasses and fancy hats. Sometimes she writes and draws picture books and comics herself, including Dinosaur Firefighters, The New Neighbours, There’s a Shark in the Bath and Vern and Lettuce. Sometimes she works on books with other people, including her friend David O’Connell who co-wrote and co-illustrated Jampires with her. When she makes books with her friend Philip Reeve, they both brainstorm the story ideas together, then Philip writes them and Sarah illustrates them. (But occasionally they swap roles for a bit.) Their books include The Legend of Kevin, Kevin’s Great Escape, Pugs of the Frozen North, Oliver and the Seawigs and several more.